Skip to content
Getting a Good Night’s Rest Sleep Hygiene: the Importance of Sleep and Mental Health

Getting a Good Night’s Rest Sleep Hygiene: the Importance of Sleep and Mental Health 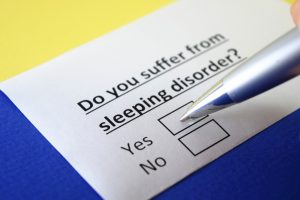 March 2nd thru March 9th is National Sleep Awareness Week. Sleep problems have become a major concern within the medical and mental health communities: America is sleep-deprived, to say the least. It is estimated around 40 million people per year suffer from chronic, long-term sleep disorders and an additional 20 million experience occasional sleep issues. Depression, anxiety, memory issues, heart disease, and cancer can often be traced back to sleep deprivation and poor sleep habits.  It’s no wonder that sleep issues account for an estimated $16 billion in medical costs each year. That doesn’t even include indirect costs due to lost productivity.

You know that drowsy or zoned out feeling you get while sitting at your desk at work, or in class where you are doing everything you can to keep your head from hitting your computer keyboard?  If so, then you are already aware of the importance of a good night’s sleep. What you might not know; however, is that sleep isn’t just important for helping you get through those dreaded Monday mornings, but it’s essential for your mental health too. Below is a list of how sleep deprivation affects Americans in everyday life and also how it can cause larger problems for those who suffer with mental health problems.

REM (rapid eye movement) sleep – the deepest stage of the sleep cycle, stimulates the brain regions used in learning. One study shows that REM sleep affects the learning of certain skills. Those involved in the study were taught a skill and then deprived of REM sleep resulting in lack of recall of what they had learned. Conversely, those that had full REM sleep easily recalled what they had learned. Essentially, when deep sleep is disrupted, it wreaks havoc on our brains and impairs our ability to think clearly and remember things.

Driver fatigue is responsible for about 100,000 motor vehicle accidents and 1,500 deaths every year, according to the National Highway Traffic Safety Administration. Sleep deprivation is not only bad for your mind and body, but in some cases, can also endanger the lives of others. One study that tested people using a driving simulator showed that sleep-deprived people who drove as badly as, or worse, than someone who is intoxicated. Lack of sleep also magnifies the effects of alcohol on the body, so a drowsy person who drinks will be even further impaired than a well-rested person who drinks.

It used to be believed that sleep problems were thought of as just symptoms of mental health conditions, but now research tells us they may contribute to or may be a cause of them. This also means that treating the sleep disorder may help alleviate the symptoms associated with a mental health condition and vice versa. It is worth noting that chronic sleep problems affect about 50 to 80 percent of those with psychiatric conditions and 10 to 18 percent of adults in the general U.S. population.

Sleep medicine experts say that if you consistently feel drowsy during the day or experience microsleeps, then you may have severe sleep deprivation or even a sleep disorder. (Microsleep is a fleeting, uncontrollable, brief episode of sleep which can last anywhere from a single fraction of a second up to 10 full seconds. These episodes of microsleep occur most frequently when a sleepy person s trying to fight sleep and stay awake.) Other signs of deficits in sleep are: constant tiredness, habitually using caffeine to get through the day, not waking up refreshed, memory problems, waking up too early and difficulty falling or staying asleep, and drowsiness while driving or during mundane activities like watching TV.

Research has estimated that 65 to 90 percent of adults (and about 90 percent of children) with clinical depression experience some form of sleep concerns. The most common sleep concern is insomnia, but 1 in 5 suffer from sleep apnea. Hypersomnia (excessive tiredness during the day) is also common among people with depression. Sleep problems are not only a symptom of depression, but also a contributor to it.

Studies show that 50% of adults with Generalized Anxiety Disorder are effected with sleep disorders. Also those with Post-Traumatic Stress Disorder (PTSD), Panic Disorder, Obsessive-Compulsive Disorder and phobic disorders are affected by some form of sleep problems. Anxiety also contributes to disrupted sleep, often in the form of insomnia or nightmares. Sleep deprivation also elevates the risk for anxiety disorders.

Various sleep problems affect 25 to 50 percent of children with ADHD. The more common conditions are daytime tiredness and sleep-disordered breathing. For adults with ADHD, the typical issues are difficulty falling asleep, shorter sleep duration and restless slumber. For both children and adults, the symptoms of ADHD and sleep problems overlap so much that it may be difficult to tell them apart.

While doctors usually prescribe sleeping pills for short-term insomnia, long-term use can lower the pills’ effectiveness. If you are experiencing sleep concerns and would like to explore a drug-free, non-invasive option, neurofeedback may be an alternative worth exploring.

Allowing yourself to get a good amount of shut-eye on a regular basis not only restores your body, but your mind too.  The power of sleep and its relationship with your mental well-being is more vital than ever in today’s busy, restless culture. Understanding how one affects the other not only helps in getting the most accurate diagnoses, but also aids in improved treatments for both conditions.

Rest was even important to Jesus in his earthly ministry. Jesus knew the importance of sleep and setting boundaries around his time. Mark 4:35-40 states:

That day when evening came, he said to his disciples, “Let us go over to the other side.” 36 Leaving the crowd behind, they took him along, just as he was, in the boat. There were also other boats with him. 37 A furious squall came up, and the waves broke over the boat, so that it was nearly swamped. 38 Jesus was in the stern, sleeping on a cushion. The disciples woke him and said to him, “Teacher, don’t you care if we drown?” 39 He got up, rebuked the wind and said to the waves, “Quiet! Be still!” Then the wind died down and it was completely calm. He said to His disciples, “Why are you so afraid? Do you still have no faith?”

I can’t help but think that as Godly, wise, and practical as Jesus was after rebuking the storm he laid back down went back to sleep.  If even Jesus needed to stop and rest in the midst of a chaotic world, with all of the important things He had to do, don’t you think we need rest, too? I think we need to follow His example and set boundaries on our time and get the restful sleep we need.

Education and awareness are essentials in understanding mental health and the importance of rest.  If you or anyone you know is exhibiting signs of a sleep disorder or a mental condition, encourage them to seek help. Together, we can raise awareness about mental health and help end the stigma.