The Permission to Grieve 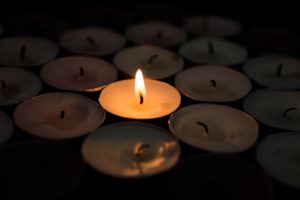 Now when Mary came to where Jesus was and saw him, she fell at his feet, saying to him, “Lord, if you had been here, my brother would not have died.”  When Jesus saw her weeping, and the Jews who had come with her also weeping, he was deeply moved in his spirit and greatly troubled. And he said, “Where have you laid him?” They said to him, “Lord, come and see.”  Jesus wept.

Jesus wept. Many of us have memorized this “shortest verse in the Bible” while growing up, trying to prove to our parents or Sunday School teachers that we are, in fact, memorizing Scripture. Although very simple, this verse is packed with so much meaning, particularly for those of us who are grieving.

Let’s talk about the context of this verse. Earlier in the chapter, Jesus is told that his close friend whom he loved, Lazarus, is ill and dying. Hearing this, Jesus waits two days then travels to Lazarus’ home. On his way he told his disciples who were traveling with him that Lazarus has already died. When he showed up at Lazarus’ home, Lazarus’ sisters were confused, both of them saying that they knew if Jesus had been there, their brother would not have died. In the passage above, Scripture tells us that Jesus was “deeply moved in his spirit and greatly troubled.” In Jesus’ perfect empathy, He hurt and grieved with those He loved. As we know from the end of this chapter, Jesus ends up raising Lazarus from the dead. While He was weeping and feeling “greatly troubled” out of empathy for His beloved friends, He already knew that the outcome was going to be that Lazarus would rise from the dead. Jesus gave Himself and those around Him permission to grieve, even knowing the hope that He had.

Let this passage remind you that you have permission to grieve. Not only does Jesus give you this permission, but in His empathy and His love for you, He weeps with you.

Now that we’ve established that we have permission from Jesus to grieve, let’s discuss what grief is. Grief is “a natural response to loss” (https://www.helpguide.org/articles/grief/coping-with-grief-and-loss.htm). The emotions associated with grief are vast, but the most common ones you will hear discussed are denial, anger, depression/sadness, bargaining, and acceptance. Other common emotions are anxiety, guilt, blaming, and fear among many more emotions. Sometimes the emotions come all at once and feel like an overwhelming and confusing mixture. Other times, individuals move through different emotions one at a time. The healthiest way to work through a loss is to give yourself permission to feel whatever you’re feeling. Each individual is different and no person’s grief will be the same as another’s. Give yourself time and be open with yourself about what you’re feeling.

Sometimes individuals feel that what they are going through should not lead to grieving. They may ask the question, “What things are okay to feel grief about?” In short, the answer to this question is anything. Grief is our reaction to a real or even perceived loss. This may be grief about losing a loved one or family pet, loss of a future you had hoped for, dealing with an illness, or suffering a breakup or divorce among many other reasons to be grieving.

Grieving as a Believer

But we do not want you to be uninformed, brothers, about those who are asleep, that you may not grieve as others do who have no hope.

What a beautiful truth we as Christians get to experience. I want you to be careful when you read this to not just read, “you may not grieve.” As stated earlier, we have permission to grieve and it is necessary to do so. But as believers, we get to grieve with hope! We have hope in our eternity with Jesus and in the promise that “all things work together for good to them that love God” (Romans 8:28). The emotions of grief may feel contradictory to the feeling of hope, but this Scripture reminds us that it is not a contradiction. I challenge those of you who are grieving to lean into the emotions of grief while also leaning into the hope. As a reminder, Jesus will be there with you in all of these emotions.

In addition to the support of Jesus grieving with you, it is important to have a community around you during a time of grief. As the body of Christ, we are called to “mourn with those who mourn” (Romans 12:15). Reach out to the supportive people in your life. If you feel that you need additional support, the therapists at SureHope would love to walk with you through this journey. Click here https://surehopecounseling.com/therapists/ for a list of our clinicians.