Skip to content
The Powerful Phenomenon of Music: How it affects us Emotionally & Psychologically 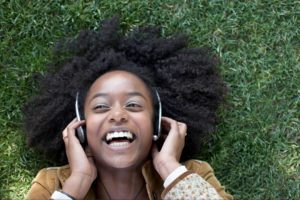 The Powerful Phenomenon of Music: How it affects us Emotionally & Psychologically

Music is a common phenomenon that crosses all borders of nationality, race, and culture. Music is used as a tool for arousing emotions and feelings, and it is considered to have a far more powerful effect than language. Whether music is within films, live orchestras, concerts or a simple home stereo; music can be so evocative and overwhelming that it can only be described as standing halfway between thought and phenomenon. But why does music have such a powerful effect that it is considered more powerful than any other sensory experience?

Music, similar to the features of language, is more rooted in the primitive brain structures that are involved in motivation, reward and emotion. The response to move and flow is mainly unconscious. Music is processed first through the cerebellum and amygdala rather than the frontal lobes.  Because music involves subtle violations of timing and, because we know through experience that music is not threatening, these violations are ultimately identified by the frontal lobes as a source of pleasure. The expectation of something pleasurable builds anticipation, which, when met, results in the reward reaction.

Music, much more than any other stimulus, has the ability to bring up images and feelings that need not necessarily be directly reflected in memory. The overall phenomenon still retains a certain level of mystery; the reasons behind the ‘thrill’ of listening to music is strongly tied in with various theories based on synesthesia.

When we are born, our brain has not yet differentiated itself into different components for different senses – this differentiation occurs much later in life. So as babies, it is theorized that we view the world as a large, pulsing combination of colors and sounds and feelings, all melded into one experience – ultimate synesthesia. As our brains develop, certain areas become specialized in vision, speech, hearing, and so forth.

Doctor and Professor Daniel Levitin, a neuroscience and composer, unpacks the mystery of the emotion in music by explaining how the brain’s emotional, language and memory centers are connected during the processing of music – providing what is essentially a synesthetic experience. The extent of this connection is seemingly variable among individuals, which is how certain musicians have the ability to create pieces of music which are brimming with emotional quality, and others simply cannot. It could be this heightened level of experience in certain people and musicians that allows them to imagine and create music, painting their very own sonic image.

Whether the music is orchestral, rock, country, or jazz, most people like to listen to music, and these includes senior adults.  Music can soothe or energize, make us happy or sad, but the kind we like to hear does something that can be positively reinforcing or otherwise we would not listen to it.

Experts say music really can “awaken” Alzheimer’s and dementia patients. Neurologists at the Boston University Alzheimer’s Disease Center are leading the field in uncovering why music seems to affect memory and, more important, how music therapy can be used to improve the lives of those whose memories are fading.

During my studies for my degree in counseling, I completed an internship in a nursing care and assisted living facility for the elderly. One of my duties was to coordinate and facilitate a support group meeting for some of the residents of this facility. The goal of the support group was to provide a place for the residents to talk about anything, and my job as the facilitator was to get them talking.  Research has shown that the progression of dementia can be slowed down when the cognitive functioning of the person is heightened. The majority of the support group participants were elderly women between the age of 85 and 95 and they all shared one common theme among them, they were widows of husbands who fought in World War II.  They all had been young women during the 1940s. As for most of these ladies, when they were gathered in the support group, most were sitting in wheelchairs or they had walkers with them and most had their heads slumped over and some just gazed around not saying anything. It was suggested that I play music for them as they entered into the support group meeting. I would play music from the “1940’s Big Band” era and as the music played, slowly the women began to speak some even sang with the music. Most began to share their memories of when their husbands were being shipped off to war, while others shared about meeting their husbands when they came home from war.  They began to talk and share their lives with one another. What a powerful experience to see how music could get many of these elderly ladies talking and sharing.

Many Christians have shared how worshipping God with song has helped them through some depressive times of their life. There are many Bible verses about music found in the Scriptures. These verses provide a lot of insight into just how important music has always been in the worship of God for all people, Jews and Christians alike. Below are a few of those verses.

“Oh Come, let us sing to the Lord; let us make a joyful noise to the rock of our salvation.” Psalm 95:1 (English Standard Version (ESV).

“Let the word of Christ dwell in you richly, teaching and admonishing one another in all wisdom, singing psalms and hymns and spiritual songs, with thankfulness in your hearts to God.” – Colossians 3:16 English Standard Version (ESV).

“My lips will shout for joy, when I sing praises to you; my soul also, which you have redeemed.” – Psalm 71:23 English Standard Version (ESV).

And in order that the Gentiles might glorify God for his mercy. As it is written, “Therefore I will praise you among the Gentiles, and sing to your name” Romans 15:9 English Standard Version (ESV).

So, music can have a powerful healing affect for the human heart. I encourage you when feeling down. alone, are even when feelings of anxiety begin to creep in play some music and

And let it bring you to a place of calmness and relaxation.