Bully, Bully! – The Dark Side of Being Light With Words 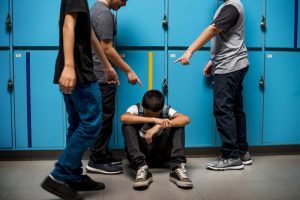 This week is National No Name-Calling Week, and it’s fitting in light of the type of the recent increase in anti-bullying campaigns over the last few years. Now, most people are already aware of the staggering statistics, but see more here if you’re interested in learning more: http://www.pacer.org/bullying/resources/stats.asp
What we’ll talk about today is what happens after the bullying has happened; the effects of bullying yourself and bullying others.

A google search tells us that the origin of the word “bully” dates back to the” mid-16th century, probably from Middle Dutch word boele, or ‘lover.’ The original usage was as a term of endearment applied to either sex.” Can you believe that? A term of endearment that over time shifted to mean “gallant” or “swash-buckler” and even later to reflect a person who used words or physicality to intimidate, manipulate, or control. With those words in mind, it’s important to be mindful of the fact that being light with your words and overdoing teasing, mocking, or using words to attack or defend can cause serious heaviness in the hearts and minds of those around you. Let’s talk about the different angles of bullying:

Those Who Are Bullied…

Those Who Bully Others…

Are likely to be participating in other risky behaviors such as engaging in early sexual activity, alcohol/drug abuse, vandalizing property and truancy, and have other criminal convictions as adults. The sad truth is that those who bully others typically have a history of being bullied and/or abused themselves. Bullying is used as an unhealthy tool to gain control of others when control is hard to come by. This abuse or bullying can be physical, emotional, and/or psychological. Those who bully others play a major role in affecting identity formation in others and can instigate a pattern of negative self-talk in others.

Those Who Bully Themselves…

Speak negative words to themselves. They have high levels of self-blame for issues out of their control, experience low self-worth, and often echo the words of others in their inner speech. These individuals are just as likely to experience anxiety and depression and isolation from others. This negative self-talk is incredibly damaging because it attaches to oneself regardless of the presence of others.

Regardless of which category you or someone you love falls into, the core problem of bullying is that it tells lies. It ignores the realities and truths of what God says about who we are: