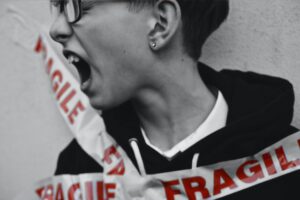 This year at SureHope, we have focused on core wounds. One that has yet to be covered is the wound that assumes “I am undesirable.” This wound, like the others, originates from a specific event or time in life where great shame beliefs or narratives formed a view of self. Often, it is most noticeable in romantic relationships, but can originate in childhood or adolescence. This wound often becomes apparent when attachment is compromised and intimacy is disconnected or unfulfilling.

Other messages that inform this wound are “I am unwanted” and “I am unattractive”. Whether these messages are from an emotionally neglectful parent, prolonged singleness, a checked out spouse, or unfulfilling friendships, the pain of feeling lonely and rejected within your relationship can feel so shameful. You may tend to blame yourself, and see yourself as the problem, rather than the situation; or the opposite, blaming the other person for their lack of initiative. This can feel so powerless and helpless. When another person is involved, and they do not reciprocate or try to meet the needs you communicate, it breeds discouragement. If left untended, this discouragement can lead to resentment and feelings of unforgiveness toward the offending party, and a deep grief.

I’m reminded of the story of Leah in Genesis when I think of the core wound “I am undesirable”. It is clear in scripture that she felt unattractive and undesirable in Jacob’s eyes. The loneliness, rejection, and abandonment she must have felt, rarely if ever feeling cherished by her husband. We see her hurt as she names her sons after her anguish, “So Leah became pregnant and gave birth to a son. She named him Reuben, for she said, ‘The Lord has noticed my misery, and now my husband will love me.’ She soon became pregnant again and gave birth to another son. She named him Simeon, for she said, ‘The Lord heard that I was unloved and has given me another son.’ Then she became pregnant a third time and gave birth to another son. He was named Levi, for she said, ‘Surely this time my husband will feel affection for me, since I have given him three sons!’” Genesis 29:32-34. Maybe you’ve felt this way in your relationship. Feeling hopeless that it will ever change, that you’ll ever have the love you desire, that you’ll feel like your spouse cherishes and desires you. I believe God wastes nothing, and He has a promise for us in Leah’s suffering. Let’s continue with Leah’s story.

“Once again Leah became pregnant and gave birth to another son. She named him Judah, for she said, ’Now I will praise the Lord!’ And then she stopped having children.” ‭‭Genesis‬ ‭29:35‬. It took time, but Leah eventually came to the understanding that while she coveted the love and affection of a man, it would never truly satisfy, and it is not where her true worth came from. Jacob’s inability to meet her intimacy needs did not dictate whether she was desirable, wanted, or significant. What I love most about Leah’s story, is not only did she learn the power of praise in her suffering, but she birthed the son that our Lord and Savior Jesus Christ would descend from. She went from undesired by man to chosen by God.

If you’ve felt the sting of feeling undesirable in your relationship, take heart. There is hope in your longing. You can do the practical work, which I suggest seeking the help of a counselor for, to recognize your triggers, explore and heal offensiveness and unforgiveness, develop communication skills to express needs, and find new ways to cultivate intimacy with your loved one. In tandem with these, some of the best work you can do is searching the scriptures, praying, praising, and leaning into the intimacy our God provides. He is the healer, and he has chosen you.

“You did not choose me, but I chose you and appointed you that you should go and bear fruit and that your fruit should abide, so that whatever you ask the Father in my name, he may give it to you.” – John 15:16

“But you are a chosen race, a royal priesthood, a holy nation, a people for his own possession, that you may proclaim the excellencies of him who called you out of darkness into his marvelous light.” – 1 Peter 2:9

“Before I formed you in the womb I knew you,
and before you were born I consecrated you;” – Jeremiah 1:5a

While you may not always be able to trust that a sinful human being will make you feel desired and wanted, you can rest assured and stand firm on the truth that God has created you, chosen you and He longs to have a fruitful relationship with you.