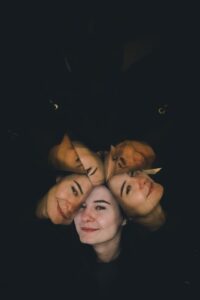 The false self-rests on the surface, as the self-presented to the world. It stands in contrast to the true self, which resides behind this false facade or image. This true self is the feeling self, but for the wounded person the feeling self must be hidden and denied. The false self puts up a good front of someone who is strong and independent, where the wounding words spoken over them has no effect  . Sometimes the false self has the “I will show you attitude “ you act like you do not care about the person who wounded you and core wounds spoken over you hold no weight. Yet deeply below the surface of the False Self lies the True self  wounded and broken over what was said to them.

Those with Narcissistic personality problems are a good example of someone living out of their “ False Self” While most people show behaviors that could be seen as “narcissistic” like selfishness or entitlement, narcissistic personality disorder is different. Someone with Narcissistic Personality problems or the Disorder can appear charming and self-assured on the surface. While these charismatic traits may look like confidence, they’re often masking insecurities rather than coming from a place of healthy self-esteem. Its all a front so you do not feel wounded and ashamed

The person living out of their true self refers to a sense of self based on a real experience rather the experience was positive or negative.  Life has both positive and negative experiences. You will be praised, and you will receive negative criticism throughout life.

How Words Can Wound Us

You heard the old childhood saying “ sticks and stones make break my bones, but words can never hurt me. Core Wounds has proven this old childhood saying wrong.  We know how words  spoken to a person can inflict major wounds into their life. Causing the wounded person to be retraumatized over and over again . Children are especially vulnerable to being hurt by words or actions . Egocentrism in early childhood refers to the tendency of young children to think that everyone sees things in the same way as the child sees things. If a child is made to feel less than or insignificant by a person close to the child such as a parent, the child begins to believe that everyone sees them as less than or insignificant. In order for the child to ward off the feelings of shame brought being made to feel less then or insignificant they create a defense mechanism to get away from those negative  feelings.  This can happen in adulthood sometimes considering the relationship and power the wounding person has with you . So, the false self is actually a defense mechanism to protect you from further wounding.

“Remember, it is in our wounds that we connect, but we can release them when they no longer serve us”.

Healing  From Our Core Wounds Allows Us to live Out of Our True Self.

God saw how you were wounded, and it broke His Heart.
Psalm 34:18 “The Lord is near to the brokenhearted and saves the crushed in spirit”. ESV

Only God and you knows who your true self really is. Even if you discover that you haven’t been living out your true identity, it’s never too late to discover who you really are with God and make a change. God created you to grow up with a strong sense of our own identity. God wants us to be free to be who He made us to be, and not who others or life circumstances have told us we’re meant to be. You should be defined from the inside out, not the outside in. Most importantly, you should be defined by how God the Father sees you and what his word says about you.

Genesis 1:26 “Then God said, “Let us make man in our image, after our likeness. And let them have dominion over the fish of the sea and over the birds of the heavens and over the livestock and over all the earth and over every creeping thing that creeps on the earth.” ESV

“Define yourself radically as one beloved by God. This is the true self. Every other identity is an illusion.” By Brennan Manning